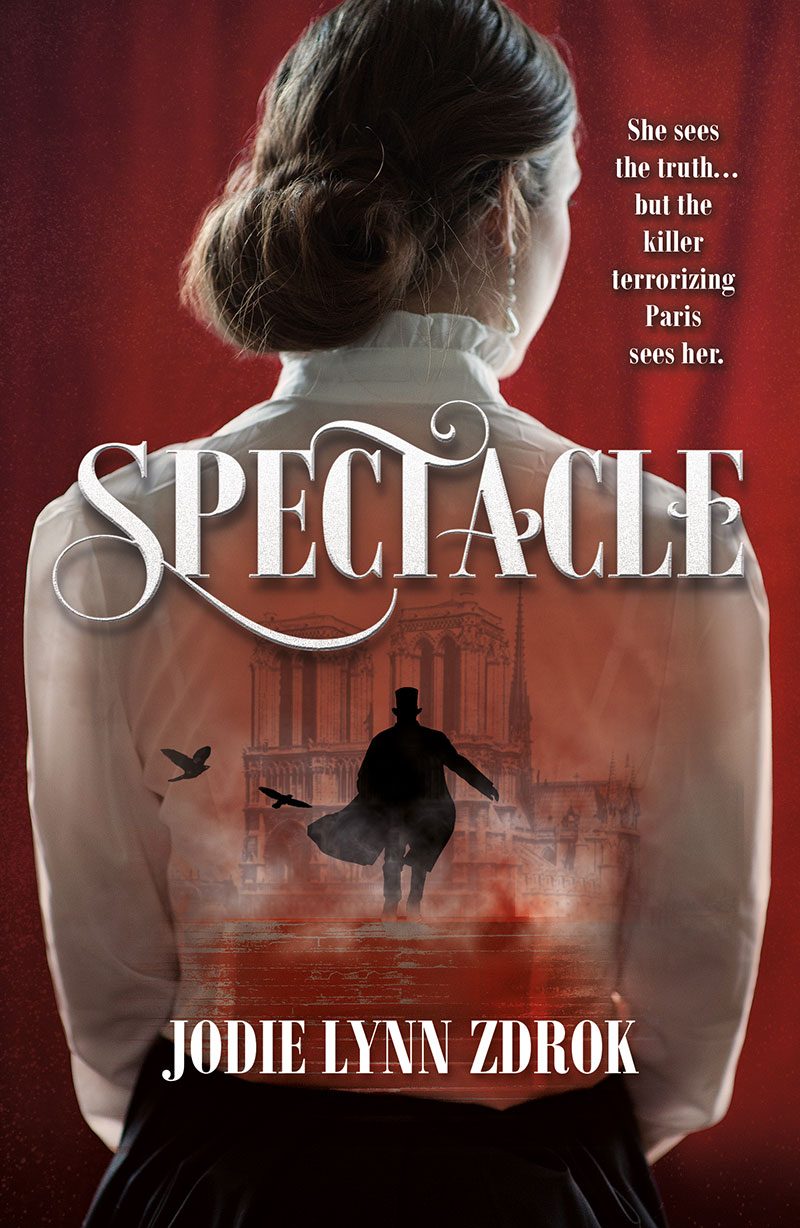 Sixteen-year-old Nathalie Baudin writes the daily morgue column for Le Petit Journal. Her job is to summarize each day’s new arrivals, a task she finds both fascinating and routine.

That is, until the day she has a vision of the newest body, a young woman, being murdered…from the perspective of the murderer himself.

When the body of another woman is retrieved from the Seine hours later, Nathalie realizes there is a killer haunting the streets of Paris—and her strange new ability may make her the only one who can discover his identity. Her search for answers sends her down a long, twisty road involving her mentally ill aunt, a brilliant but deluded scientist, and eventually into the chilling depths of the Parisian Catacombs.

Nathalie must follow the clues in her visions to discover the truth about who is murdering the young women of Paris—before she becomes a target herself.

“Clever and full of murder, Jodie Lynn Zdrok’s SPECTACLE had my eyes glued to the pages as the body count rose, and mystery stacked upon mystery as our heroine closed in on a killer who seemed miles ahead of the Parisian authorities. Fans of serial killers and criminal investigations will find much to love, and fascinating passages about morgue tours will appeal to the morbid rubbernecker in us all.”
– Kendare Blake, #1 NYT Bestselling author of the Three Dark Crowns series

“With a fierce heroine, grisly 19th-century murders, and a mystery that left me on the edge of my seat, SPECTACLE is an immersive, Parisian, YA From Hell that I absolutely devoured!”
– Gretchen McNeil, author of Ten and #MurderTrending

“Hints of the murderer’s identity are subtly and intriguingly folded into the story, and unresolved plot threads pave the way for future cases, during which Nathalie can discover more about her powers. The blend of history, mystery, and fantasy makes this debut novel a good pick for fans of Libba Bray’s Diviners series or William Ritter’s Jackaby books”―Booklist

“The book seamlessly brings several threads together: the mystery of the murder and the horrors of the killings themselves; the beauty, bustle, and darkness of nineteenth-century Paris (the killer’s pursuit of Nathalie through the catacombs is thrillingly described); the bizarre but historically based practices of morgue viewing and blood transfusions for magic; and the destructive nature of family secrets and their generational effects. …the tension amps up to a gasp-worthy climax.”―Bulletin of the Center for Children’s Books

“Zdrok has concocted an ambitious Victorian-era story. …Intricately plotted, the story’s pace burns slow before racing ahead to set up and topple assumptions about the true identity of the Dark Artist.”―School Library Journal